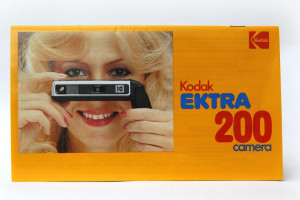 Packaging for a Kodak Ektra 200 camera, produced between 1980 and 1987. Despite its early lead in digital photography, Kodak decided to focus on its existing film camera market – ultimately leading to the company’s obsolescence and bankruptcy. (Photo Illustration by Fred Duval/Getty Images)

In January 2012, former photography giant Kodak filed for bankruptcy. The company, which had become firmly ingrained in family life over more than 100 years by enabling millions of people to preserve their memories in photos, met its downfall not through a lack of expertise, but through poor decisions made at the top levels.

Despite effectively inventing the digital camera, and investing millions in the development of digital technologies during the 1990s, the company decided against selling digital cameras, choosing to instead continue developing film cameras, fearing the move to digital would heavily damage their existing business. Those within the company decided that, because digital picture quality was relatively poor compared to film, there would be no significant demand for the product. The repercussions of this decision proved to be the company’s undoing.

By not taking the trouble to ask potential customers for their opinions, Kodak was left on the back foot when the likes of Canon and Nikon , who had not been seen as fierce competition before, swiftly moved into the digital camera market and quickly won customer approval. When Kodak finally did manage to put a digital camera on the market they again read consumer demand incorrectly: though their camera produced a far superior image, the price was far out of the reach of most families’ budgets. What killed Kodak was not incorporating ‘design thinking’ into their innovation and business development .

Over the past decade, design thinking has transformed from a trendy buzz-term used only in the most edgy areas of the start-up community into a business concept with real relevance. At the heart of design thinking is the absolute necessity to empathize with the people you are designing a service or product for. In the era of the Internet of Things, the pressure to keep up with advances in technology has never been greater, in turn creating a whole new set of opportunities for those willing and able to overturn the status quo. Companies such as Apple (AAPL +0.19%), Uber , Netflix (NFLX +0.2%) and Nintendo have changed the rules of entire industries by getting the business model right first and using new technologies to achieve their goals. 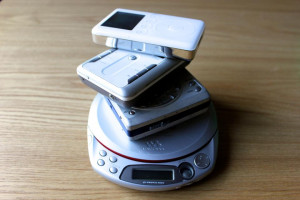 An iPod on top of various obsolete media players. The success of Apple’s MP3 player was not down to the underlying technology as much as its user-centered design.

As consumers demand more sophisticated products and services, there’s no doubt technology is key to the relentless innovation required. But with so much technology at our finger tips, does this spell the end for the traditional human-centered interaction between businesses and customers? This is where design thinking plays a crucial role in how companies formulate their business models.

Being able to put yourself in the shoes of the customer always has been and still is vital for businesses to succeed. This is the essence of design thinking. However, many products and services fail as a result of managers not consulting with or listening to the needs of their target audiences.

An example of this done right can be seen in the furniture company Herman Miller. Together with Boston-based design and innovation consulting firm Continuum Innovation, they developed a special chair for hospital patients recovering from an operation. Rather than just doing their work in-house, the design team met patients and caregivers in 19 hospitals to understand what worked and didn’t work in the types of chairs currently on offer. They found a chair needed to benefit patients both physically and psychologically. By addressing the users’ true needs, they designed a chair that helped speed up recovery and also successfully boosted hospitals’ throughput and productivity.

Design thinking has also been shown to solve social issues. A few years ago, advertising agency Lowe SSP3 was commissioned for a project by the Colombian Government aimed at demobilizing guerrilla fighters. By using design thinking, and in particular conducting in-depth interviews with former guerrillas, the agency gained an interesting insight: they found that what guerrillas valued and missed most was their families. By empathizing with them, the team realized that, in a Catholic country such as Colombia, Christmas was a time when the guerrillas would feel most emotionally vulnerable. This led to the launch of Operation Christmas, which involved installing 75-foot trees near guerrilla strongholds and decorating them with Christmas lights. Each was equipped with a motion detector that lit up the tree and a banner when the guerrillas walked by at night. The banner read: “If Christmas can come to the jungle, you can come home. Demobilize. At Christmas, everything is possible.” As a result, 5% of guerrilla fighters gave up and demobilized.

To survive and succeed in today’s complex world, businesses need to generate products and services that improve the lives of their customers . And being able to see the world through their customers’ eyes and hearts is the secret to success.

The first FORTH facilitator in Italy | helping companies to innovate | I imagine a world where innovation improves our everyday life making people more free and richer in solidarity-based relations. My commitment is to build bridges between people and ideas to become the locomotive of change together. If these words are familiar to you, we have a long way to share.

Welcome to Eonet, interact with your community from every corner of the globe.